Genocide of the Greeks of Pontus 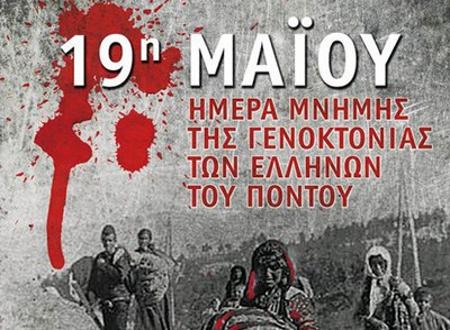 A fine section of Greeks lived in the north of Asia Minor, in the Pontic area, after the dissolution of the Byzantine Empire. The fall of Trebizond in 1461 by the Ottomans were not distorted beliefs and Greek consciousness, although they lived cut off from the national body. Can a minority-40% of the population, but quickly dominated the economic life of the region, living mainly in urban centers.

Their economic recovery combined with demographic and intellectual growth. In 1865 the Greeks of Pontus amounted to 265,000 souls in 1880 to 330,000 in the early 20th century touched 700,000. In 1860 there were 100 schools in Pontus, and 1919 calculated in 1401, among them the famous Recitation of Trebizond. Besides schools had printers, magazines, newspapers, clubs and theaters, underscoring their high spiritual level.

1908 was a year - a milestone for the peoples of the Ottoman Empire. This year broke and won the Young Turk movement, which put the margin of the Sultan. Many were the hopes invested in young military for reforms within the dying Empire.
Soon, however, their hopes were dashed. The Young Turks showed their hard nationalist party, launching a plan persecution of Christian communities and Turkification the region, taking advantage of the involvement of European countries in the First World War. The Greek state, busy with the "Cretan Question" was not in the mood to open up another front with Turkey.

The Turks, on the pretext of 'national security' displace much of the Greek population in Asia Minor inhospitable hinterland, via so-called "labor battalions" ("Amelia tambour"). In the "labor battalions" were forced to serve men who are not joining the army. Worked in quarries, mines and road construction under crippling conditions. Most were dying of hunger, hardship and disease.

Reacting to the oppression of the Turks, murders, deportations and the burning of villages, the Pontic Greeks, like the Armenians went rebels in the mountains to salvage that was possible. After the Genocide of the Armenians in 1916, the Turkish nationalists under Mustafa Kemal longer had the whole field open before them to exterminate the Pontic Greeks. That failed the Sultan in 5 centuries succeeded Kemal in 5 years!
In 1919 the Greeks with the Armenians and the temporary support of Venizelos government tried to create a standalone ellinoarmeniko state. This plan was thwarted by the Turks, who took advantage of the event to advance to the "final solution."

On 19 May 1919, Mustafa Kemal disembarked in Samsun to start the second and most brutal phase of the Pontian Genocide under the guidance of German and Soviet advisers. Until the Asia Minor Catastrophe 1922 Pontic who died exceeded 200,000, while some historians put the figure to 350,000.
Those who escaped the Turkish sword fled as refugees in South Russia, and around 400,000 came to Greece. With their knowledge and their work contributed greatly to the recovery of kathimagmenou that time Greek state and changed the demographic balance in Northern Greece.
With enough admittedly late, the Greek Parliament voted unanimously on February 24, 1994 the proclamation of May 19 as Memorial Day for the Genocide of Pontian Hellenism.